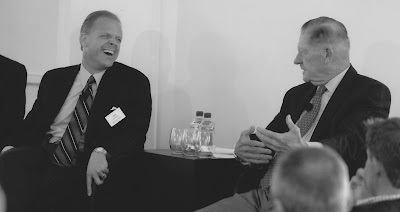 With Larry Bossidy (right) the former CEO and Chairman of Allied Signal Corporation (Honeywell) at the Leadership Panel for a global executives association in Ireland. The panel was comprised of diverse supply chain executives who spoke about what the hallmarks of exceptional leadership ability. The panel members shared leadership stories from "the front lines"--these were essentially real-life situations that were brought up for this panel discussion.

I was honored to have had the chance to meet with and have Larry Bossidy as a special guest this unique panel. He is one of the foremost executive leaders of the 20th Century as well as the 21st Century. Prior to Allied Signal/Honeywell, he was a top executive at GE for over 34 years. Upon his scheduled retirement from Honeywell in April of 2000 (Honeywell merged with Allied Signal in December 1999), he stepped back into his role as CEO and Chairman when General Electric attempted to acquire Honeywell in 2001. He retired again in 2002. To date, Larry Bossidy is a Contributor for CNBC, busy writing books and speaking. He is also currently serving on the Board of Berkshire Hills Bancorp and is an advisor to the private equity firm, Aurora Capital Group.

Larry Bossidy is the co-author of:

Confronting Reality: Doing What Matters to Get Things Right

Execution:The Discipline of Getting Things Done

Tim Stratman - Stratman Partners Executive Coaching, Inc.
Tim is the President of Stratman Partners Executive Coaching, Inc. a Chicago-based coaching firm focusing on helping executives become more effective leaders. He is retained by C-Level executives and their organizations to provide one-on-one executive coaching and executive team development. Tim works with executives across a diverse set of industry verticals covering both private and publicly held companies. In addition to his C-Level practice, he has a sub-specialty practice focused on helping senior supply chain executives. He developed his core belief in the power of senior level executive coaching during his twenty year career in the Fortune 500. Emerging from practical experience, his coaching expertise evolved during a career that progressed through a series of diverse roles and challenges. These included P&L responsibility, global senior sales and marketing leadership, and supply chain management.